Barrier: an obstacle that prevents movement or access. The string of islands we refer to as the barrier islands protect the mainland from storm surges. These islands have a history of their own of barriers, overcome by the will of courageous individuals who survived enslavement, challenged discrimination, and reshaped the social order.

On the evening of November 28, 1858, the last shipment of slaves to arrive in Georgia from the Congo in West Africa landed along the southern shore of Jekyll Island, Georgia on a ship called “The Wanderer”.  It was indeed a grotesque conspiracy that included the then owners of Jekyll, John and Henry DuBignon. The Wanderer docked in the West African nation of Angola on October 4, 1858.  Angola was dominated by the Portugese. Congress had banned the importation of slaves since 1808. There were 487 slaves taken aboard, but only 409 survived the journey and emerged from the ship on Jekyll’s southern shore. The owner of the slave ship, William Corrie partnered with businessman Charles Augustus Lamar to have the slaves shipped from Jekyll to Savannah, Augusta, and parts of South Carolina. This group of slaves were brought to Jekyll to avoid the attention they might have received had they been brought in through the much busier seaport of Savannah. This afternoon I walked along those same shores with the students of Marbut Traditional Theme School.

With ample historical accounts, images, and artifacts that detail this fascinating history, it seems implausible that it would not appear prominently in the current curriculum for Social Studies in Georgia. The historical significance of Jekyll Island for students in Georgia runs deep. Its inclusion into the existing narrative would add a greater degree of regional history, diversity and cultural relevance to a curriculum that provides a cursory examination of the arrival and persistent struggle of people of color in Georgia. Three survivors of the ordeal, Cilucangy, Pucka Geata, and Tahro (pictured here) recall the capture, the stench, and the horror of their enslavement. Their faces tell a story that refuses to be buried by the sands of time.

We took 47 students to what was once known as the historic St. Andrews Beach. Once, the only beach accessible to African-Americans, St. Andrews beach is a little known slice of African-American history nestled along the pristine beaches of Georgia’s Jekyll Island. Prior to 1955, there were no beaches in the state of Georgia that permitted African-Americans to enjoy the sun and sand with their families. In fact, in the 1940’s, three African-American women were jailed for donning swimsuits and attempting to visit the beach on Jekyll. Once opened, St. Andrews beach became an incubator of thriving black businesses including a hotel, restaurants, and a performance hall. We often hear of those heroes who battled segregation in institutions such as schools and sports leagues. We hear little about those individuals who worked to ensure that everyone could have access to the often overlooked freedoms we enjoy today.

Today, the land that was once called St. Andrews beach is now home to 4-H’s Camp Jekyll. In partnership with the University of Georgia, they provide environmental education to students. I first visited the site in 1985 as a 5th grade student, just two years after 4-H first leased the site. Now, some 34 years later, I returned with a group of 5th graders to explore the same beaches with them as we extend their classroom experiences to the shores of Jekyll. Students’ dissected sharks, learned about endangered sea turtles, explore the marsh, and took a class on ornithology.

As we boarded the charter bus to head to our canoeing activity, I noticed all of the students rushed to the back of the bus. I asked them all to fill in the seats from the front of the bus. Our driver, Mr. Johnny Houseworth, an African-American man in his 60’s, smiled at this and began to tell me that he was in the 4th grade when Dr. King was killed. He stated that it was then that he decided that he’d never again sit in the back of a bus. Before we left to begin canoeing, Mr. Houseworth offered us a grim warning: “Don’t y’all fall in dat wawtah!” Small, intimate, teachable moments continued to occur throughout the trip that will likely leave a lasting impression on these metro-Atlanta students.

One of the highlights of our trip included a very candid conversation with our students about the legacy of struggle of people of color and how they are an extension of that struggle.  After dinner, under a pavilion near what was once called the Negro Beach House, we spoke to them about the significance of this place and their choices.  The impact of this trip was two-fold as we shared with students the cultural relevance of St. Andrews beach and they gained an environmental education throughout the experience.  At once we are asking our students to look back at their legacy, look ahead toward their future, and look within at their own potential. The call to action for educators is to gain a deeper knowledge of our history, integrate that knowledge into our conversations with young people, and never allow that history to be forgotten, even if that means we must ‘trouble the waters’.

Andre Benito Mountain is a writer and educator. He is the author of The Mountain Principles: Lessons on Leading and Learning and The Brilliance Beneath.  His forthcoming book is entitled Principals Don’t Walk on Water: They Walk Through It. He is the principal of Marbut Traditional Theme School in metro-Atlanta.

2 thoughts on “Trouble the Waters: Beaches, Barriers and Legacies of Overcoming at Jekyll Island” 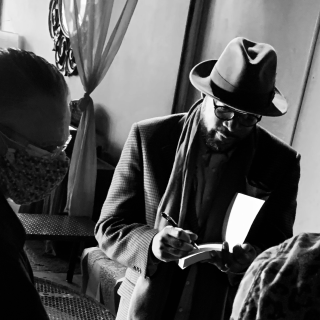